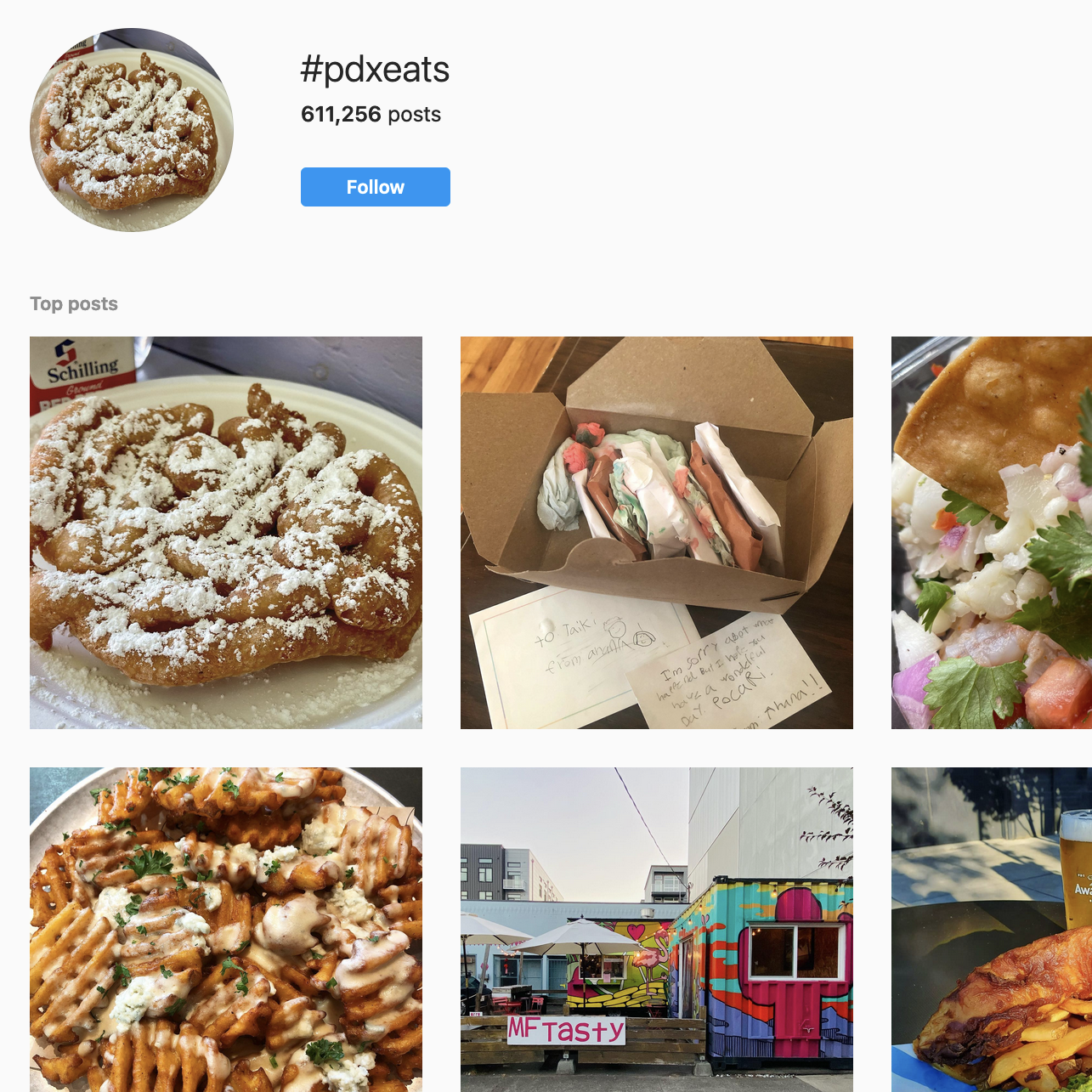 As the pandemic nears its end and restaurants reopen, many Portland restaurants are struggling to reel in old customers and gain new ones. Instagram influencers offer an opportunity for Portland restaurant owners to reach the legions of Portlanders who venture out to new restaurants based on influencer recommendations. We have compiled some of the most important Portland Food Instagrammers with links to their foodie-friendly feeds.

From a savory breakfast chicken sandwich to a decadent chocolate mint cake, Ross covers a diverse line of PDX foods in her nearly 50,000 strong Instagram account. As a Portland-born foodie, it’s no surprise Ross knows every nook and cranny of Portland’s food atmosphere. Find Ross as eatrichordietryin on Instagram.

Born in South Korea but spending most of her childhood in Portland, Woo practically understands the insides and outsides of the city. Known as judiaann on Instagram with 10,600 followers, her favorite eatery is Hat Yai for its Southern Thai fried chicken.

When Slate moved to Portland in 2003, the city was relatively small for her, having come from Eastern Washington. Almost two decades later, Slate adores Portland, loving the Italian dishes of Gino’s the most. Find Slate on Instagram as melisslate.

With a meaty following of 13,300 followers, Wu is a blogger, graphic designer and a vegan writer in addition to a foodie. Her account displays the tasty non meat alternatives to many meals in Portland which many couldn’t imagine would exist, such as vegan cheesesteaks. Find her as waz.wu.

Even though Joffe has only recently become a Portlander (seven years ago), she has quickly warmed up to the restaurants here, appreciating 180 Xurros and Proud Mary the most. Follow her Instagram account foodie.passport to see her mouthwatering posts of various dishes worldwide.

Stylist and writer Kari Michelle Young displays a savory array of Portland dishes on her account karimichelleyoung to her 75,000 followers. Although most of her photography involves protein heavy meals, Young also photographs the delicious vegetarian meals PDX has to offer.

Okazaki’s a seasoned Portland foodie, basically royalty amongst Portland Food Instagrammers, having spent 43 years of his life here. And in that timespan he has found his favorite places Castagna and Han Oak and amassed nearly 14,000 followers on Instagram as garythefoodie.

Although a Chicagoan before moving to Portland in 2008, Laskey has dedicated her account to showcasing the vast array of delicious foods Portland has to offer. Join her 2,500 followers on Instagram where she’s known as pechluck.

Originally an Arizonian, Radomski has quickly warmed up to Portland’s famous food trucks, especially the food truck Namu. Follower her account jennabeebasics to see not only the Portland foods she has savored but her gardening and cookbook recipes.

A self-described “Portland native,” Seon Hye loves to eat at Bamboo Sushi and Gino’s, like Slate. Follow her account jseonhye to keep up with this veteran Portlander’s foodie chronicling.

Californian Jen Stevenson is also a travel writer, having moved to Portland 14 years ago. Follow her account jenlikestoeat for her vast variety of food photography, including several Asian dishes.

These Canadian sisters comb through a diverse set of Portland foods on their account foodbellypdx, ranging from gnocchi dishes to more elaborate meals such as crab tots and quesabirria tacos. In addition to garnering 15,600 followers on Instagram, the duo are also travel guides.

Oregonian restaurant reporter Michael Russell has lived in Oregon for 12 years and cherishes the Vietnamese soups of Ha VL. Follow his account tdmrussell for a combination of news insight and foodie wonders.

Bostonian Stokes only moved to Portland five years ago but has already become a proud PDX food connoisseur. Her favorite place is MF Tasty Tiny Restaurant and she boasts about 7,000 followers on her account perfectfooddays.

How to approach Portland Food Instagrammers

Be yourself. Be friendly. And be respectful. Offer to deliver them something special—remember, a positive post from one of these folks and instantly get you on the radar of thousands of hungry Portland foodies. Anything you offer to give them you should consider a marketing cost. Just like all marketing costs, some will pay dividends, and some won’t. That’s just the way the cookie crumbles.

If you don’t receive the coverage you want or any coverage at all, don’t react negatively, either in public or in private. These are busy people doing this work because they love food and love helping new restaurants be found. None of them actually make money off of their activities. Remember, these folks don’t owe you anything. Again, be kind, be friendly, be respectful.

I’m starting to become somewhat of a burger aficionado here in Portland and wolfsheadsmokehouse has a burger that checks every box. Flavorful, greasy, cheesy, saucy, and messy….just like a good juicy burger should be!

The burger was around $13 (no fries 🥺) but it’s something I would get again. Full disclosure, my burger was a bit underdone, more of the rare side of medium rare, but it was still good and worth another shot!

They are located at the BG Food Cartel in Beaverton. If you haven’t been, you want to check them out, there are tons of great choices in the park!

seasons greetings from my noods and I!!
📍: 99ranchmarket
👟: AJ1 High Pine Green via indexportland ...

Come say hey! We’re here til’ 8 and won’t be back until Wednesday. We’d love to see your faces! Also heads up we’ll be closed Friday and Saturday the 24th and 25th to spend time with family. We’ll miss you but we’ll be back on Sunday, bring the fam down! See ya soooon!

Get excited! Holiday flavors at mikikomochidonuts are here! 🎄
⠀⠀⠀⠀⠀⠀⠀⠀⠀
And they have also brought back their delivery service, making it super easy to get your donut fix 🍩 Head to their profile to order your holiday mochi donuts 😋 Here’s what I got:
⠀⠀⠀⠀⠀⠀⠀⠀⠀
-Ginger Pear
-Figgy Pudding
-Chocolate Pudding
-Coconut Nog
-Candied Yam with Mochimallows
-Cranberry Pie
⠀⠀⠀⠀⠀⠀⠀⠀⠀
We love mikikomochidonuts because they are both gluten and dairy free, so they can be enjoyed by all! 👏🏼 Which flavor are you most excited to try?
•
•
•
•
#cravingportland #mochidonuts #pdxeats #donuts #glutenfreeportland #pdxfood ...

🌮Eat molemole_mexicancuisine 😋
⠀
I can guarantee you will love it. The al pastor & carne asada taco were super flavorful and the mole (their namesake) definitely delivered 👅 🎇
⠀
I would say be careful how you carry your plastic bag as things became a bit of a mess with the paper container barely containing the mole sauce. But I read if you eat there your food is served on beautiful ceramic plates. 💯
⠀
I look forward to going back to try more of their expansive menu. It’s a family affair with mom & pop in the kitchen and their daughter at the window✨Go show this newish cart on albertamainstreet da love❣️ ...

I’ve been a bit distracted solo parenting for what feels like forever, but here’s a pic of the new Buffalo Fried Chicken Sandwich at bigschicken. Just one of the many fun new items on their Happy Hour menu, available from 3-6pm daily and all day on Mondays. 🔥🐓🔥🐓🔥 ...

Order online for pickup or delivery via cccpdx or walk up! Open until 8 pm!

Great article in eaterpdx by jacksonglidden about our main squeezes at camascountrymill!
🌾🌾🌾
Tissa Stein (founder of taborbread) talking about Camas Country Mill:
‘When she started planning to open Tabor Bread in Portland in 2012, she needed to find a local grain source, to fuel the stone mill she bought for her bakery. She and her initial baker, Corey Mast, began touring wheat fields and milling operations around Oregon and Washington, but they were charmed by Tom Hunton — who had just finished building his stone mill. “Camas stood out to us, and Tom is just a prince,” Stein says. “I feel like we kind of grew up together in a certain way.”’

The sun is out! Bundle up and get down to the cart for your brunch fix 🙌 If you missed out on the Hot Beefy Cheddah, todays the day to grab one. You also have the option to add chopped brisket to your Brunch Burrito and Brunchwrap 😋. Full menu in stories. Open 11:30-2:30.
.
📸 pdxfeast
.
.

Look at this unbelievably delicious lefse: smoked turkey, cream cheese and cranberry sauce! Only for a limited time at Nord on Mississippi! ...

Round 2 legit to quit ✌🏽 Birria day two for you! Come thru, but don’t forget you may also order online for easy pickup. If you’re trying to avoid the weather. Link in bio

WE’RE STILL AT THE PREPPING THE SPACE PHASE. WITH THE HOPE TO DO SOME MINIMAL UPDATES AND GET THE SPACE READY BY THE END OF THE YEAR. THAT SAYS WE’RE WORKING ON HIRING AND RECIPE TESTING IN DECEMBER AND SHOOTING FOR JANUARY SOFT OPENING.

SOME THINGS THAT CAME TO MY MIND ABOUT WHAT THE RESTAURANT IS ABOUT:

SOME OF THE THINGS WE’LL DO INCLUDES:

1. HAVE REGULARS DEPOSIT THEIR TO GO CONTAINERS/BAGS.
2. USE AS MUCH REUSABLE AND DISPOSABLE PRODUCTS AS POSSIBLE.
3. EVENTUALLY HAVE COOKING CLASSES, BOOK CLUB AND OTHER EVENTS HOSTED IN THE SPACE.
4. DOING COLLABORATIONS AND POP-UPS TO HIGHLIGHT OTHER BUSINESSES AND STAY CREATIVE.

There has been a problem with your Instagram Feed.